Our elementary school likes to be politically correct. Our Christmas program is now the "holiday" program. In their effort to not offend anyone, they've actually offended the majority of community members by trying to take Christmas out of the holidays. Sure, we get a sign here or there but generally the program is very secular and many years it's had absolutely nothing whatsoever to do with Christmas.

This year I went to the dress rehearsal of the program. I noticed that my daughter was singing some song she'd made up about an Irish man and an American man because they were supposed to be representing St. Stephen's Day in Ireland. This holiday is actually religious but it was difficult to see that on stage. After the rehearsal my daughter came home and I talked to her about the song. We then decided she'd sing, "Silent Night," instead. She practiced all afternoon. (I still don't know why she was dressed up as an alligator).

After her performance many people, including her music teacher who had put the program together, complimented her. Her teacher said the song "touched her soul." I was so proud of her. The song was so sweet and, for a moment, reminded all of us about the true meaning of Christmas.
Posted by Rebecca Talley at 8:55 AM 1 comment: Links to this post

My daughter is a member of Applause, a performing choir, that performed at a local mall yesterday. She is the tall blonde. They all did a wonderful job. I love that they learned sign language for this song, A Gift of Love.

Posted by Rebecca Talley at 2:42 PM No comments: Links to this post

Email ThisBlogThis!Share to TwitterShare to FacebookShare to Pinterest
Labels: A Gift of Love, Applause, Books for Christmas, Performing

I'm so excited! My new children's chapter book, Gabby's Secret, is now available on the Kindle and on the Nook. 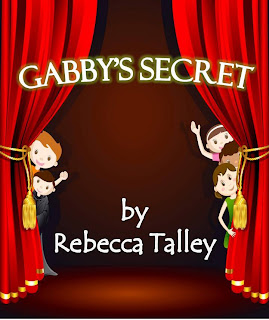 Third-grader Gabby Honeycutt is devastated when her teacher asks the whole class to participate in the school talent show because everyone will discover her horrible, terrible secret--she's talentless.

What do you think? It's a short chapter book for kids ages 6-8 (third grade reading level) and was inspired by one of my daughters.
Posted by Rebecca Talley at 3:05 PM No comments: Links to this post

My oldest son graduated from high school in 2005. In the last few weeks, two of his classmates have passed away. One died from blood clots in her lungs. I did not know her but feel sad for her family and friends. She was only 24.

The second classmate, Tyler Black, who died over the weekend in a single-engine plane crash on his way to Aspen, I did know. He was in the theater program with my son. He was quite thin and for one of the dance shows he was dressed up as Superman and did some hilarious dance moves. I don't even remember who else was onstage with him because he was so funny he stole the scene. My son was cast as Captain Hook in Peter Pan during his senior year. Tyler was cast as his sidekick, Smee. Tyler played this character so well. He was creepy yet endearing. He and my son made a great combination on stage. Since that time, I often saw Tyler in the audience at various performances supporting his friends.

Tyler's mother has been the choir teacher at our middle school for many years. She's taught most of my kids and was especially encouraging with one of my daughters inviting her to perform in a song competition. She's worked hard to help kids in middle school learn to sing. I cannot imagine the despair she feels at this time.

I have lost both my parents, my maternal grandparents who raised me after my parents died, my paternal grandfather, my sister-in-law, and a very close family friend. Losing a loved one is so painful. My grandmother often said that losing a child was the worst possible pain. I think that the day my mother died, part of my grandfather died with her. He said several times he wanted to jump in the coffin with her. So heartbreaking.

I am thankful for the plan of happiness and to know, really know, that life does not end with death. Though it is very painful to lose someone, death is simply a step in our eternal progression. It is this knowledge that has allowed me to go forward in mortality. I know I will see those I've loved and lost. And I know they are never very far from me.

I don't think the pain of losing someone ever fully disappears, but it isn't that sharp, stabbing pain as time goes on. I still miss those I've lost to death. And I become emotional when I speak about them, but I have faith I will be with them again someday.

We never know when it will be the last goodbye. I still remember vividly the day my father left for work and I got up to tell him goodbye, something I didn't usually do. I even ran to my bedroom window to watch his car leave the subdivision. It was the last time I saw him.

I hope that the families of these two young people will find some comfort. I hope they will feel the arms of the Lord wrapped around them as they trudge through life without their loved ones. And I hope that we will find joy with those who are yet alive. That we will take the time, especially during this season, to right any wrongs and to let those we love know that we love them because life is so very fragile.
Posted by Rebecca Talley at 12:26 PM 1 comment: Links to this post

November was a very long month as months go. Seems like our family was hit with trials all at once. Through these experiences, I've been able to learn a few things.

1. There is no peace like the peace that comes from God. He is there to comfort us and help us when things are difficult.
2. God wants to bless us, even in times of difficulty. One of the sweetest ways is through priesthood blessings.
3. I am raising eternal children and an eternal family. Activities are fun and watching them develop talents is important, but everything is secondary to living the gospel.
4. Don't stress about the small stuff. It's okay if the house is messy or the meal isn't gourmet or my shoes don't match my purse. Stress about what is truly important: saying prayers, studying scriptures, attending meetings and the temple, serving others, family unity, having FHE, focusing on the Savior, and living the gospel--the rest of it doesn't matter too much.
5. Prioritize the most important things.
6. Love others as the Savior does and don't be selfish with blessings. Kindness and love go a long way in soothing a soul.
7. Heavenly Father knows and loves each one of us and He watches over us and inspires others to help when necessary. It is our responsibility to be prepared to be inspired. What a blessing it is to see this in action.
8. Don't be so judgmental and critical of others' actions or inactions because you just don't know what they may be struggling with or what burdens they may be silently carrying. Better to give someone the benefit of a doubt than to assume something that isn't true.

Life is a beautiful thing. It is such a blessing to live in mortality and to learn to rely on God. He knows all and understands all, even when we don't, or especially when we don't. If we learn nothing else in this life, we must learn to trust in Him.

I am truly thankful for all that I've been blessed with. I don't live in a mansion or drive a fancy car. I'm usually dressed in sweats with no make-up. I don't go on exotic vacations every year or get may hair and nails done each week. But, I have what matters most. A loving, honorable husband who is steadfast and immovable and loves me and our children, children who are trying to make the right choices each day and showing me how to be a better person, extended family that quietly serves and sets a Christlike example for me, and I have the most important thing of all, the gospel of Jesus Christ.
Posted by Rebecca Talley at 9:07 AM 3 comments: Links to this post

Email ThisBlogThis!Share to TwitterShare to FacebookShare to Pinterest
Labels: blessings, Family, Gospel of Jesus Christ, Priesthood Blessings
Newer Posts Older Posts Home
Subscribe to: Posts (Atom)
I participate in the Amazon Affiliates Program. I may make a commission on sales from links I provide at no extra cost to you.