On Little Wings by Regina Sirois 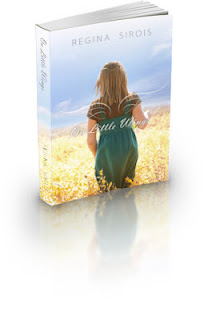 From the back cover:

Jennifer must do the impossible – bring her mother home. When a family is torn apart by death, two sisters take violently divergent paths and the story of their family appears to end terribly and abruptly. Two decades later Jennifer never dreams that the photo she finds stuck between the pages of a neglected book will tear open a gaping wound to her mother’s secret past. Abandoning her comfortable life with her parents and best friend in the wheat fields of Nebraska, Jennifer’s quest for a hidden aunt leads her to the untamed coast of Maine where she struggles to understand why her mother lied to her for sixteen years.

Across the grey, rocky cove she meets Nathan Moore, the young, reluctant genius surrounded by women who need him to be brother, father, friend, provider, protector and now, first love. The stories, varied, hilarious, and heartbreaking, unfold to paint a striking mural of the shattered past. As Jennifer seeks to piece together her mother’s story, she inadvertently writes one for herself.

Where to begin? This is an ordinary coming-of-age story. It's about a young girl who discovers her mother has been lying to her and then sets out on a journey to find her long-lost aunt. Along the way she learns about her mother, about herself, and about love. However, that's where ordinary ends. The way in which Sirois creates this lyrical story is anything but ordinary. This book is nothing short of magical. The poetic and beautiful writing pulled me in from page one. The story enchanted me throughout the book. This is not the kind of book I generally read, but it is the kind of book that changes me--makes me see the world in a different way.

The characters are multi-layered and so realistic I feel like I could walk into Smithport and join in a conversation with any of the them. Sirois created such a real world with her vivid descriptions and lilting words. Each character was unique and flawed, including the main character and her first love, Nathan.

The setting was as much a character as any of the "people" in the story. The way that Sirois showed me the setting and allowed me to be part of it was masterful. The characters interacted with the setting and I can't imagine this story taking place anywhere other than the small seaside town of Smithport, Maine.

And I loved the last line.

I highly recommend this book. It was captivating. Truly amazing. I nominated it for a Whitney Award.

Here is the link to purchase it on Amazon Kindle.

You can also purchase the print version.

You can learn more about the author here.
Posted by Rebecca Talley at 9:24 AM 1 comment: Links to this post

I Believe in Jesus Too by Mark Nielsen 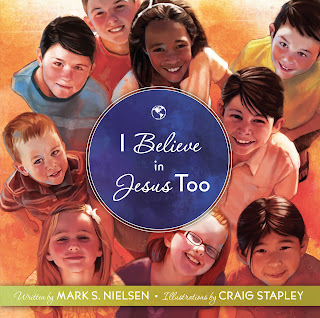 From the back cover:

All around the world, Latter-day Saint children go to church, sing songs, pray, read scriptures, participate in family home evening, and get baptized.

We may meet in different types of buildings or speak different languages, but we have a lot in common.

Because no matter where we live, we all love and believe in Jesus, and He loves each one of us just the same.

Are you like Pablo, Dimitri, Bayani, Junpei, and Shamara?

Do you believe in Jesus too?

Don't you love the cover of this book? Doesn't it make you want to open the pages and see what's inside? You won't be sorry because a beautiful message lies between these pages.

You can purchase your own copy here.
Posted by Rebecca Talley at 6:36 PM No comments: Links to this post

Email ThisBlogThis!Share to TwitterShare to FacebookShare to Pinterest
Labels: Books by LDS Authors, I Believe in Jesus Too, Mark Nielsen

How Great Thou Art

My son married into a very musically talented family. In this video my daughter-in-law. Malae, and her brother, Nick Sales, sing together in this moving rendition of a beloved song. Nick entered the MTC yesterday to begin his mission and will be serving in Colombia. I'm sure he will have long and wonderful music career ahead of him. And I get all teary when I think about my sweet daughter-in-law using her musical talent to sing lullabies to my grandchildren someday.

Posted by Rebecca Talley at 9:30 AM 4 comments: Links to this post

My ninth child was baptized last month. She shares a birthday with her older sister so we had a big celebration. Child #9 was baptized by her older brother who was ordained a priest in November. I love these "parent paydays" when I can watch an older child honor his priesthood and then use it to bless the life of his sibling. The brother who baptized my daughter was baptized by his older brother about 8 years ago. It is such a blessing  to see my children baptized, especially by a sibling.

Life whirs by me so fast I can hardly catch my breath, I can't believe I have 9 children now baptized as members of The Church of Jesus Christ of Latter-day Saints. It seems as though I was just holding #9 in my arms a few days ago. Children grow so fast.

She was so excited about her baptism that she made invitations to it last summer and couldn't wait to invite everyone to her special day. She was a little disappointed that friends from school didn't come, but we had lots of family and ward members that supported her. She was doubly excited that she'd lost a couple of teeth before her baptism. Life can be so exciting when you're 8.

I'm so proud of her and feel so blessed! 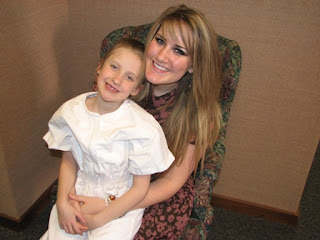 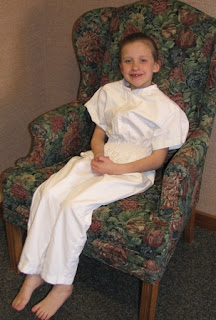 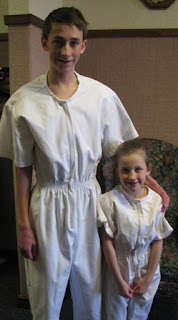 Posted by Rebecca Talley at 12:05 PM No comments: Links to this post 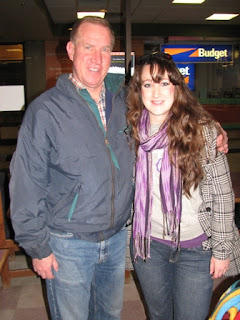 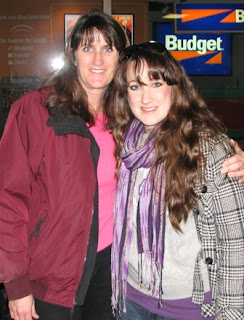 Early Monday morning, I'm talking 4:00 am, we drove my oldest daughter to the airport so she could fly to Orlando to begin her Disney college program. She'll be gone until mid-August. I'm super excited for her, but a little sad that she'll be so far away. I'm sure she'll have the time of her life living in Florida and meeting all sorts of interesting people. She said that she's already met people from all over the world and she's realized how boring she is because she's white and only speaks English.

She met her new roommates and boggled their minds because she's Mormon. One of the girls had never met a Mormon before. Then, she told them she had 10 kids in her family and that really blew their minds. It's odd to me that in this day and age someone could actually live in the US and never meet a member of the Church. Of course, I've always lived in the west so maybe back east it is a novelty to meet a Mormon.

Even though I will miss her, I'm sure this will be a fantastic experience and one she'll never forget.
Posted by Rebecca Talley at 8:56 AM 2 comments: Links to this post

Email ThisBlogThis!Share to TwitterShare to FacebookShare to Pinterest
Labels: Disney College Program, Disney World, Family, Florida, Orlando
Newer Posts Older Posts Home
Subscribe to: Posts (Atom)
I participate in the Amazon Affiliates Program. I may make a commission on sales from links I provide at no extra cost to you.