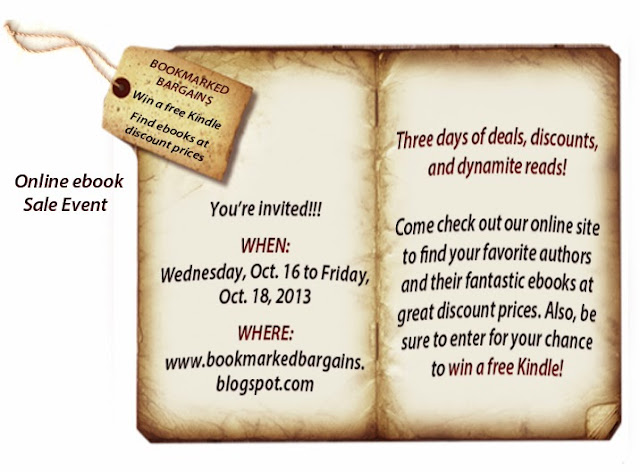 The Bookmarked Bargains sales event is going to be unbelievable!
Not only can you win a free Kindle you can find free and discounted books
from some of your favorite authors. Here's a list of who's participating:

The deals run Wednesday, October 16th through Friday, October 18th.
Click here to enter the Kindle drawing and find fabulous discounted books. Thanks!
Posted by Rebecca Talley at 8:13 AM No comments: Links to this post

Our House has Gone to Hail 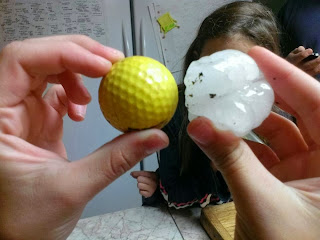 When the storm hit, people scrambled outside to try to move vehicles, but were injured by the falling ice chunks so they had to go back inside.

People in the community where we lived for the past 19 years had damage to windows, siding, roofs, AC units, cars. Many had their cars totaled. Many have to replace roofs, including us. The insurance adjuster recommends not just replacing the shingles, but actually removing the existing roof and replacing it on our house, barn, and a shed. He also recommends we repaint the house. We lost all the screens on the west side and have dents in the metal doors on that side. The barn has dents in its propanel siding on the west side.

It's truly amazing what damage a hail storm can do. Apparently, this storm suddenly hit and everyone was taken by surprise when the hail started falling. It didn't even last that long.

I think sometimes we humans presume that we are in charge of this earth and we have power over it. That somehow we can influence its destiny. Silly us. It only takes a storm like this, quick as it was, to show us that we are powerless to prevent such a storm. Anyone who's been in such a situation--tornado, hurricane, flood, blizzard--knows we humans become very small.

I'm thankful no one was seriously injured and that homes and vehicles can be repaired. I'm thankful it wasn't much worse. I'm also thankful to know there is a power greater than us. It is God. We may want to fight it. We may want to deny it. But the truth is, He is in charge.

Posted by Rebecca Talley at 4:32 PM No comments: Links to this post

Email ThisBlogThis!Share to TwitterShare to FacebookShare to Pinterest
Labels: God, Hail Storm, Storm, weather
Newer Posts Older Posts Home
Subscribe to: Posts (Atom)
I participate in the Amazon Affiliates Program. I may make a commission on sales from links I provide at no extra cost to you.