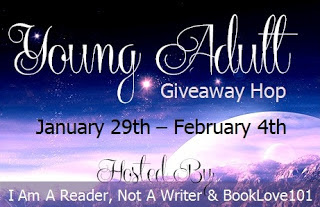 Young Adult Giveaway Hop by I Am a Reader Not A Writer.
January 29th - February 4th
Co-hosted by BookLove101

Welcome to the Young Adult Giveaway Blog Hop. I will be giving away a copy of my YA urban fantasy, Aura. The winner may choose a print copy or the ebook
. 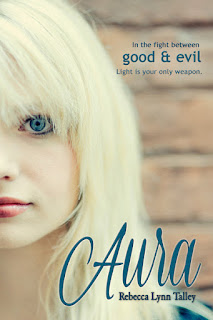 In the fight between good and evil, Light is your only weapon.

Crystal Scott finally feels like a normal teenager. She has a lead in the high school play, a best friend, and a gorgeous boyfriend. With prom only a few days away, Crystal’s ordinary life seems perfect.

Endowed with great Light because of her virtuous choices and her inherent gifts, Crystal’s aura has become visible to those with the ability to see auras. Unfortunately, her power has also attracted the attention of demons intent on destroying all Light.

When Vincent Crandall, the human host for a powerful demon, discovers that Crystal’s Light is strong enough to disrupt the connection between demons and their hosts, he realizes she may be able to sever the connection altogether. Determined to stop her from interfering with his plans to rule the world, he sends operatives to neutralize her.

Crystal is thrust into battle against a demon army she didn’t even know existed. With the help of a mysterious young man and his mother, Crystal must learn to use the power within her before the demons kill her parents and Vincent harnesses her Light for himself.

To enter the giveaway you can:

Each one is worth one entry. If you do all five, you have five entries :).

Please leave a comment and let me know what you've done or email me: rebecca(AT)rebeccatalley(DOT)com.

Good luck and thanks for hopping with us. Please hop on over to the following blogs for a chance to win some fantastic prizes!
Posted by Rebecca Talley at 4:05 PM 28 comments: Links to this post

Les Miserables: We Can Choose Good

We went to see Les Miserables last weekend. It's definitely a sweeping saga filled with so much sadness and despair, but also a message of redemption. I loved the message that you can choose to change your life. You can do things differently. I think too many people believe they are powerless to change their lives. but I don;t think that's true. We may not be able to control things around us, but we can control our reactions and our thoughts.And we can make choices that affect people in positive ways.

Jean Valjean was thrown into prison for stealing some bread to feed a hungry child. He spent 20 years in prison and he was mistreated. (When the movie started, I didn't even recognize Hugh Jackman). After he is released he tries to find some work and a place to live but is constantly rejected. Finally, a priest invites him in and gives him food and a place to sleep. Valjean repays this kindness by stealing form the priest. When Valjean is caught and returned to the priest and accused of stealing, the priest has a choice. He chooses to forgive and give Valjean another chance. Because of the priest's mercy, Valjean decides to change his life and he spends the rest of the story trying to do the right thing and extend mercy himself.

Valjean's story is poetic and haunting but at the end he finds redemption because he has turned his life over to God. Jackman was amazing in this role. He was Valjean in every sense of the word. His performance was moving and authentic.

Fantine's story is so sad and full of despair. Every time that Anne Hathaway was on screen I was crying. I had no idea she had such a beautiful voice and she was superb in this role. Her emotions felt so real. But still such a tragic story.

Javert was driven by duty. He hunted Valjean all of his life because he felt it was the right thing to do. He was a very tragic character as well because at the end of the story he felt like a failure. Russel Crowe did an excellent job of portraying Javert. He was raw and full of emotion.

Cosette's story was both tragic and  happy, while Eponine's story was tragic but also redemptive. Despite her horrendous parents, Eponine was selfless and truly wanted Marius's happiness. She could see beyond her own needs.

The Thenardiers--totally disgusting. Gross, crass, and every time they appeared on screen I wanted to scream. I found nothing redeeming about them at all. And I strongly disliked the whole "Master of the House" scene. There were raunchy parts that didn't need to be there. It definitely could've been cut down by 2/3. I understand they provided the contrast to the main story, but I could've gotten the gist of that in much less time. The actors portrayed their parts well, I just didn't like their parts at all.

I found the boys who wanted a revolution heroic, yet tragic. It was sad to see their demise, but they died for what they believed in.

The film was epic. The live singing was amazing. I thin it was aptly named Les Miserables because, well, most of the characters were miserable. They lived tragic, dark lives. I loved that because of the priest's mercy, Valjean made the choice to change his life and I think we can all learn something form that. Whether we are the ones who extend that mercy to someone else or we are the ones who need that mercy, we can make our lives better. We do not have to let situations dictate our choices. We can be whomever we choose to be. It is within our power to choose good.
Posted by Rebecca Talley at 7:43 AM 2 comments: Links to this post

Don't Go to Home Depot for a Sink

A few years ago, we remodeled our kitchen. We've had to remodel our house a few times because when we built it, we had four kids. As more babies came and kids got bigger and needed more space, we had to change rooms around and remodel.

Since I'm OCD, I don't like grout lines unless they can be perfectly clean all the time. I know, I'm weird like that (when I had carpet, I had to vacuum it all at the same angle so the lines all matched). When we remodeled, we decided to put in granite countertops (no grout lines). And, since it was new and exciting, and seemed to make cleaning the counter easier by sweeping crumbs straight into the sink, we had an under-mount sink installed.

We bought the granite from Home Depot and hired them to install it. Of course, they hired an outside contractor to do the job. Apparently, an installer who was not well-trained on how to install a sink.

Just before Christmas  (of course, because we had company coming) while finishing breakfast, we heard a strange sound and then water started pouring out of the sink area. Why? Well, the super-awesome-everyone-is-getting-the-new-under-mount-sink fell out of the countertop. That's right--fell out.

We rushed to try to hold the sink up as best we could while we unloaded it. (I'd like to say that it was all clean and sparkly at 6:00 am and didn't have a full sink of water with dishes soaking from the night before because whoever was supposed to load dishes hadn't done so, but that'd be lying.)

To make a long story short, I called Home Depot to see if they'd fix it. Of course, they hid behind the "we only warranty it for a year" excuse. They offered to call someone to charge me to fix it. Probably the same someone who'd installed it improperly in the first place--are under-mount sinks supposed to fall off after only a few years? Ever? As we examined the sink and researched the proper way to install it, we found that our installer had only glued the sink and had not taken the other steps necessary to secure it.

So we originally paid for a sink installation and we ended up with a sink that fell off and subsequent water damage to the basement below. And Home Depot avoided having to pay for it.

Will I ever shop at Home Depot again? I think not. No, I know not. They should have made good on this installation since they didn't ensure it was done properly in the first place. But they didn't. And, thankfully, I married Amazing-Computer-Man-who-also-is-Amazing-Handyman (among other things). So the sink is fixed. All is well. Except for the water damage we have to fix in the basement.

But I would never recommend Home Depot--especially if you expect something like a sink to last longer than a few years.
Posted by Rebecca Talley at 9:05 AM 1 comment: Links to this post

Aura is Free on Kindle January 10-12. If you haven't downloaded it yet, I hope you will. And, please tell your friends. Here's the link to download it for free until Saturday night. If you don't have a Kindle, there are free apps so you can read it on your computer or other electronic devices.

If you've read Aura, I'd sincerely appreciate it if you'd post a review on Goodreads and/or Amazon. I'd love to have some help spreading the word about Aura.

Thanks for your help and support!

Posted by Rebecca Talley at 7:33 AM No comments: Links to this post 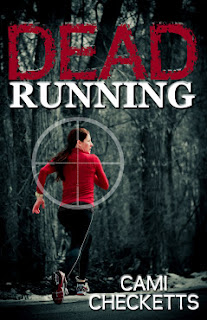 From the Back Cover:

Cassidy Christensen is running.Running from the mercenaries who killed her parents.Running from a scheming redhead intent on making her life miserable. Running from painful memories that sabotage her dreams of happiness.With two very tempting men competing for her attention, she hopes she'll finally have someone to run to, but can she trust either of them? When secrets from her past threaten her family, Cassidy decides to stop running and fight for her future.
A light-hearted and clean romantic suspense, Dead Running will have you lacing up your running shoes and impatiently waiting for the sequel.

I really enjoyed this book. I loved the voice of Cassidy, the main character. She was so honest. She said embarrassing things and things I wouldn't have expected, which made her seem so realistic. She didn't feel contrived at all. I loved her.

Checketts kept me guessing until the end. I had no idea who'd turn out the be the bad guy. Throughout the story, Cassidy is confused about her feelings for two men. I found myself rooting for one and then rooting for the other. I felt as confused as she did! Checketts did a great job making me feel like Cassidy.

I also liked the secondary characters and felt they were developed well. And I thought Cassidy's pet names for the characters like "Hot Redhead," "Muscle Man," and "Greasy Beanpole" were funny, especially because I've found myself giving similar nicknames to people whose real names I don't know. I think that added a dimension of realism as well.

Dead Running is exciting, action-packed, well-written, and has plenty of romance. I highly recommend it.

You can purchase Dead Running here.

You can learn more about Cami Checketts here.

Posted by Rebecca Talley at 8:27 PM No comments: Links to this post

Posted by Rebecca Talley at 10:32 AM No comments: Links to this post

Email ThisBlogThis!Share to TwitterShare to FacebookShare to Pinterest
Labels: Aura, Book Giveaway, Goodreads, Novel, paranormal, Urban Fantasy
Newer Posts Older Posts Home
Subscribe to: Posts (Atom)
I participate in the Amazon Affiliates Program. I may make a commission on sales from links I provide at no extra cost to you.