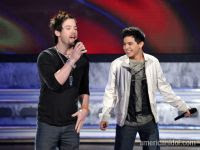 Wow--what a night. I loved the opening to American Idol. That announcer guy has quite a voice.

David Cook sang his first song and I thought he did a great job. He's amazing. When he teared up after his last song, it made me teary, too. I love how he can make a song his own by rearranging it.

When David Archuleta sang his first song, it gave me goosebumps. I love that kid. His voice is so pure and he sings with such emotion and conviction. I love to listen to him sing. He seems to be such a geniuinely good kid, too.

My teenage daughters can't decide who they like the most and which one they want to marry :).

This has been a great season with so many talented contestants. I am very excited to see who wins tonight. I think it's going to be extremely close because they are both so good.

My vote is for David Archuleta.
Posted by Rebecca Talley at 9:35 AM